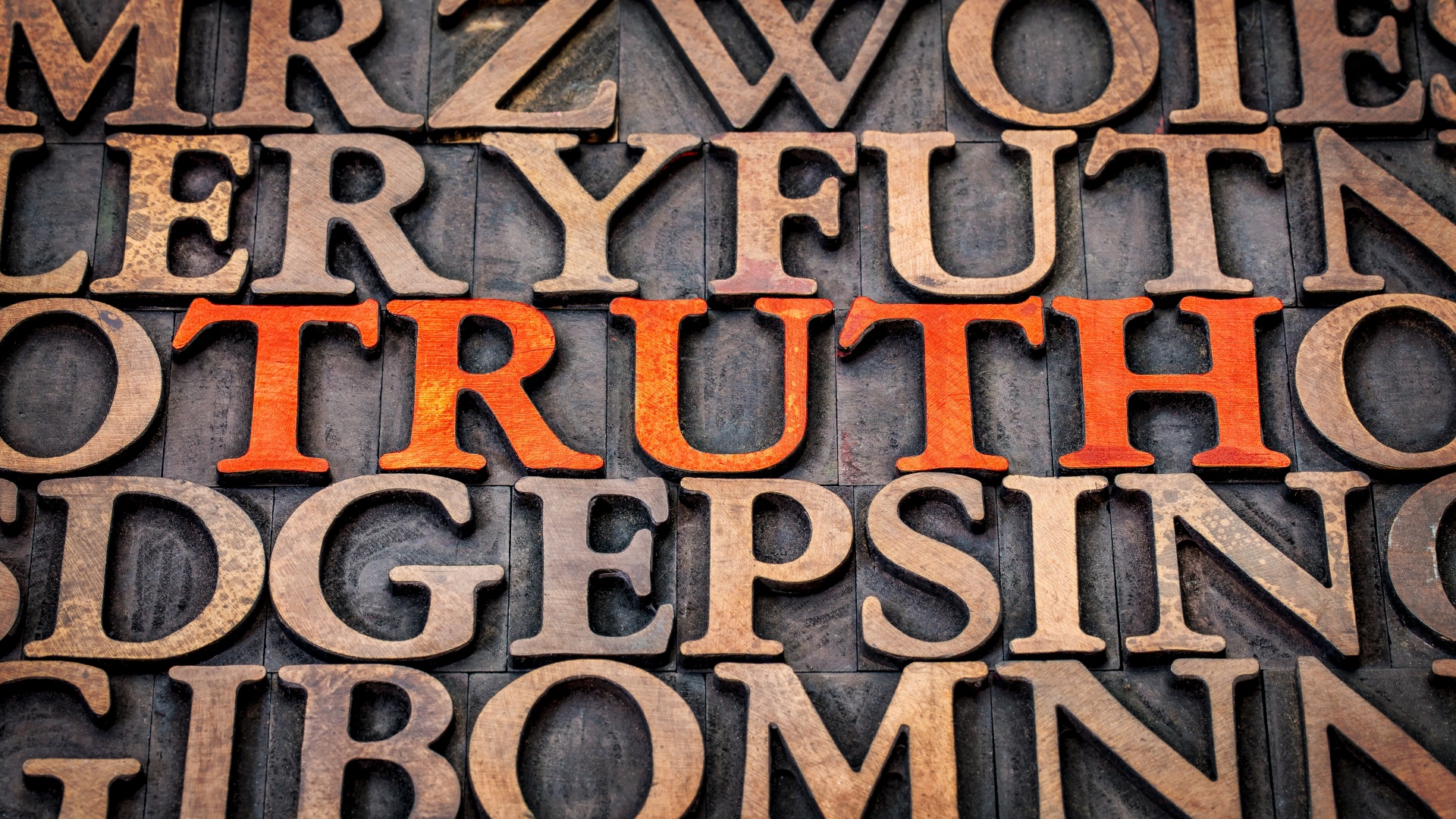 Pilate therefore said to Him, “Are You a king then?” Jesus answered, “You say rightly that I am a king. For this cause I was born, and for this cause I have come into the world, that I should bear witness to the truth. Everyone who is of the truth hears My voice.” Pilate said to Him, “What is truth?” (John 18:37-38)

Most of us remember when Jack Nicolson yelled at Tom Cruise, saying, “You can’t handle the truth!” It would seem this generation has the same problem. We all claim to want to know the truth, but today it is truth itself that is under scrutiny. What is truth? Can truth be known? Is truth relative or objective? These are questions that have been asked by thinking people and debated by philosophers down through the ages.

If one were looking for a definition to truth, many answers might be offered, but for our purposes we will define truth as “that which corresponds to reality.” In other words, there are some things that work and some things that just simply do not. A young person may have a great idea of how things should work in life, but we might look sideways at their ideas and say, “They’re a little out of touch with reality.” What we’re saying is, “That’s just not the way things work.” We’re saying their ideas are not true.

This definition still doesn’t help us completely, because there are different views of reality. To the materialist who does not believe in the transcendent or the supernatural, reality is only what we can see, feel, and touch. There is nothing but the material universe. Reality is reduced to a series of equations and deductions based on empirical evidence. In fact, with each various worldview, there is a different perception of reality, thus a different definition of truth. So, how do we arrive at the truth? Who is right, and can we know with certainty that what we believe is true?

I don’t hope to answer all these things definitively in a short article (I’m not clever enough to do so anyway), but I do want to raise the question to underscore its importance. In the current cultural debate regarding truth, there is often so much hostility and vitriol that genuine, constructive dialogue is impossible. In fact, most discussions about what is “right” degenerate quickly into what we want rather than about what is right and true. To be intellectually honest with ourselves, however, we should be willing to acknowledge that whatever truth is, it does not stand to reason that a thing is true simply because we want it to be or because we “like” it that way.

All of us know that the truth can be uncomfortable, both personally and socially. In fact, truth can be downright inconvenient. However, truth is not made any less true simply because it does not conform to our preferences. Truth does not swing to the left or right to suit us. Truth falls like a plumb line. Often when real truth is presented to us, it seems to be askew to our reality, only because it is our own reality that is off plumb. Many who have had to come to terms with the truth, in one way or another, have had to realize that how they were thinking or living, was simply out of sync with reality. For the first time, they are now seeing things as they really are.

We’ve all most likely been “hit” with the truth before. Maybe a friend who loved us enough to be honest with us told us something that was not pleasant to hear but struck us as undeniably true. Remember that feeling? Truth rattles us, challenges our presuppositions, and realigns us with reality – that is, if we are willing to receive it. That’s where the rub comes in. How can we be open to truth if we won’t allow anything to challenge us within our “safe zone?” How do we hear what we’ve already disqualified due to its simply being different to what we believe?

Here’s a question worth honestly asking ourselves: “If I could be assured of knowing the truth, would I want to hear it?” Don’t answer that too quickly! We might say, “Of course I would!” but would we really? What if it turns your world upside down and exposes all your false assumptions? What if you have to acknowledge the foundation upon which you have built your life really does not conform to reality? Would you bravely look truth in the face and surrender, or would you deny truth its rightful place? Are you prepared to be wrong? Will you admit it to yourself if you are?

Jesus said He came to bear witness to the truth. Whatever you believe about Jesus, there is no denying His life was singular. In regard to influence, there isn’t even a close second. Just three and half years of public life changed the world forever and gave definition to the meaning of life for untold millions. He is still doing that today. Contrary to what you might have been told, He did indeed, on several occasions, claim to be the Son of God. That would be a completely outrageous claim, unless, of course, it is true. It was C.S. Lewis, the great Christian author and apologist, who rightly said that we cannot believe that Jesus was merely a good man. He has not given us that option. He claimed to be God. Thus, He is either liar, lunatic, or Lord. You will have to choose for yourself whether you think a liar or lunatic could have so profoundly impacted the world in the way Jesus has. For myself, I believed long ago what I still believe today, that Jesus is the way, the TRUTH, and the life (see John 14:6). If that is true, then life can only truly work if we surrender to that truth. Our life can only correspond to reality when we say, “Yes,” to Him.

The debate as to the real nature of truth will continue. Not everyone will be persuaded. I wish they could be. But to answer the questions we posed earlier, the answer is, “Yes, there is a truth we can know and of which we can be assured.” In fact, the Bible says, “He who believes in the Son of God has the witness in himself; he who does not believe God has made Him a liar, because he has not believed the testimony that God has given of His Son” (1 John 5:10). God’s Spirit is still bearing witness to that truth Jesus came to testify of before the world. Those whose hearts are truly open, can still hear His voice.

Truth is too big a thing to be negotiable. It’s not up for grabs. We don’t get to choose what is true. Truth is ageless and immutable and immune to our tampering. It can either be the rock upon which our lives are built or the stone over which we will stumble and fall. Paul warns us not to be like those who “did not receive the love of the truth, that they might be saved” (2 Thessalonians 2:10). What we can do is choose to love and embrace the truth, for it is the truth that shines in the Person of Jesus Christ that drives away the shadows and lights our way home.